The passing of another year...

Well 2013 hasn't been a great year for me in a number of ways but the one most readers here will care about is the railway works.

Things have moved along a little, The storage yard tracks are in place and point motors are installed but I still need to wire this up. 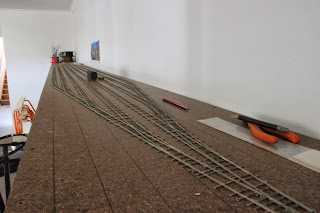 There are eight (8) roads with the shortest roads being 2.1 meters in length and the longest 3.4 meters. My maximum train length is based on 2 meters.

Bowen Creek has been partly disassembled, the ceilings have been removed as was originally designed and found its future home. The bridge section is now completely removed and will find its home elsewhere on the layout and will be renamed but that name will be revealed later. 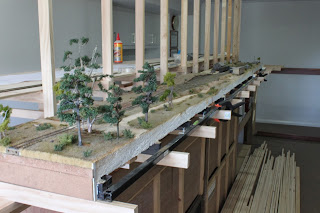 You might note that I have also decided to model BC from the opposite side. I always felt the layout looked better from behind the station. Plus it renews the scene for me too. I am thinking I will replace the station building with a concrete building, maybe a PC3. 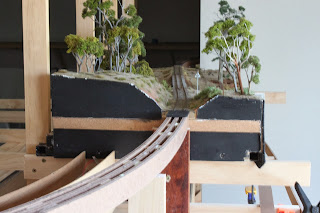 Still lots to do here but you are looking at the entry to the scene from the Cowra end storage yards.

So until then, hope everyone has a Happy Xmas and 2014 brings good things.

Posted by Andrew Campbell at 12:20 PM