After attending the New England Convention last week, my opinion of exhibitions has deteriorated. This to me was the pinnacle of  what I what from this hobby. Like minded people getting the chance to socialise and share ideas and techniques on modelling. If you missed it, get down and pray the next one isn't too far away.

Exhibitions are a rush, they're noisy and you really don't get the chance to sit down and mingle with fellow modellers. Some have dinners on the Saturday night but most are too buggered to really make a night of it and that's even if they attend. The New England club need to write a paper on how this was done so other clubs can learn from their achievement.

How great it was to catch up and meet fellow bloggers. If these guys had stopped to chat at an exhibition it would be hard to really have got to know them as you are usually too busy to really spend much time chatting. Bowen Creek stood still for most of the weekend and people still stood there enjoying the model without trains running. You don't get that at exhibitions much, generally the crowd moves on once the train has left the scene.


Some of the other bloggers have written about the weekend but I will add some pics of what caught my attention. 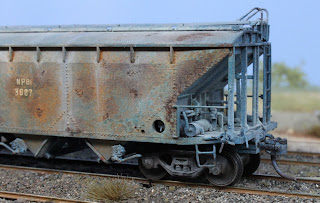 I thought Dean Bradley's weathering work was exquisite. There is no doubt I will try to follow some of his techniques. 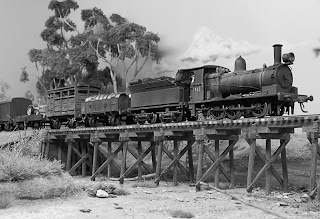 Peter Street's Oil Depot. I never really considered one of these for the home layout, but after Peter's talk I think I will add one. He pointed out how this can add some operation to the layout with little space used, I never considered this, but he is right. 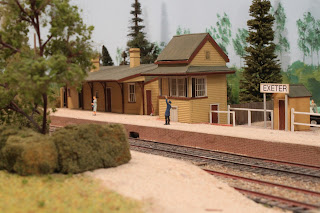 Exeter..self explanatory really
Thanks to everyone who attended, you guys really made the best Model Railway weekend and it's funny how the young fellows and the old buggers got along. Apparently, according to the forums, this doesn't happen. Maybe this says something about the forums. Some of the talks were done by older gents, I wouldn't have had such a good time without them.

CYA at the next one
Andrew
Posted by Andrew Campbell at 10:39 AM