Trackwork is most likely the main reason why I got into Proto87. I have always believed that we spend too much time on loco's and rollingstock, then neglect the scene. Don't get me wrong, I like loco's and rollingstock but what's the point if the track looks like what I ran my old lima on when I was 7 years young.
I think you will agree that the photo in the last post is a big improvement on any manufactured point but for it to be accurate all the tolerances have to be accurate. To give you an idea, the flangeway scales to 0.58mm. Later I will do a post on making a P87 point but for now lets just do basic trackwork. 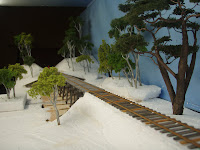 We ended up doing two different methods of hand laid track on Bowen Creek, both of which are totally acceptable. As I mentioned in an earlier post we used 3rd planit to do the track plan, the advantage of this is you can print it out to scale and glue the paper down on you road bed so all your sleeper spacing is marked out for you. So the first method is to lay a copper clad sleeper every sixth sleeper and then solder the rail to this. I liked this method, I found it to be forgiving and reasonably quick. The slow part is etching the copper away, pretty mind numbing. Especially seeing we etched all the copper other then where the rail would sit, leaving just a little play. The reason for this is you can gouge some grain into the fibre glass and it looks more like timber after painting. Then airbrush the rails, hand paint the copper sleepers and slip in the timber sleepers to complete. The timber sleepers are the sugerpine sleepers by Kappler (part No.KP00SL8-HO)and are available from Gwyder Valley Models. The Timber is stained with India Ink and is a mix between the white and black to give a nice light grey colour. The tip is to start with white and add a little bit of black, not the other way round. The other option is to use the Aim weathering products which are also very good. The rail is painted with a blend of Floquil paints. the blend was around 50/50 rail brown and rust. I say around because only god knows how accurate it was. 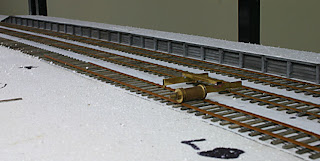 Can't tell you who turned up the roller gauge for us, he will kill me.
The other method is to lay all timber sleepers, already stained, glued with white glue and weighted over night. Paint the rail on the work bench, this was a bit of a pain and is why I preferred the first method. Next is to brush on the glue to the bottom of the rail, an even bigger pain. The glue is called Pliobond and is used in the building industry, pretty hard to locate in Australia but click here for an equivalent. It is heat activated, so after it is applied it sets as to not be very messy. Once you have the rail in place we applied a warm iron (still to hot to the touch) to the rail which causes the compound to run and once the iron is removed it cures. You can reheat it but I don't think it is advisable.

As I said both methods work very well and I grant you the end result is a major improvement on any commercial track.

Next is to apply some ballast, being a branch line it needs to be blended with ballast and dirt as branch lines don't use a lot of ballast anyway. Only thing was we decided that this was now to be a more secondary line so we used more white and black ballast then dirt. This is all from Chucks.

I guess in a nutshell what I am saying is take your time with your trackwork, It will serve you well into the future and if it looks like the real thing you will always be proud of it. Don't cut corners and if it's not right, hang the expense get it right, you won't be sorry for the sake of a few dollars. My home layout will be right and it will bring me years of pleasure without me saying, gee I wish I took more time with that. Bowen Creek was the test and I've learned alot, it's just the beginning and I hope you learn from it too. Woah....got a little bit out there then, but you know what I'm gettin at. 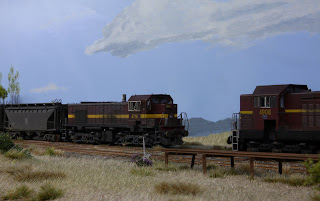 Thought I would leave you with this shot. Did a hell of a lot of work to that Traino 47, I will tell you about it one day. Cheers for now.
Posted by Andrew Campbell at 9:17 PM