Hi All,
Things have been progressing slowly towards the Newcastle show which has kept us busy. We are trialling the cobalt motors for the points and I must say with mixed results. They claim to be quieter than the tortoise, which they are, but some are still as noisy. One is a struggle to hear any sound at all while another is as noisy as anything else on the market. They are smaller which is welcomed.

Anyway, this is a little bit about the backdrop we installed which I think is unique to the exhibition circuit. I had this idea of a seamless backdrop, I hate obvious joins in layouts and it spoils the effect for me, as it really catches my eye. We had built the layout as a diorama style, so I didn't want to ruin the effect with big joins in the backdrop.
How do we achieve this? I had no idea so it was time to appoint someone. John Barrett was the man for the job.
JB is an exceptional modeler, his achievement in the hobby is renowned with his work on Beyond Bulliac. JB is a sign writer by trade and a pretty good one too. I took the idea to him and he thought it was a good one and so I left it with him. Two months later he had it, canvas! John had done some RTA banners for whatever reason, you know the ones you see on the highway roadside, I thought this would work. A small sample piece was tested using plastic paints so it could be rolled up without it cracking. Everything seamed in order so we went for it. JB had arranged for a local guy to cut the canvas and sew in a small 6mm rope along the top and bottom and two eyelets at each end which attach to pins either end. An aluminium u-tube is installed which the rope slides into to hold the sheet up.  Now I have no idea what all these things are called but once again a picture tells a thousand stories. 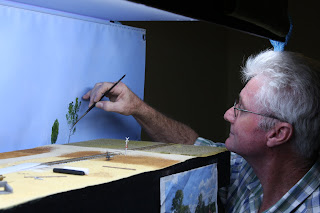 Above you can see JB happily painting away, if you look at the canvas you can see the eyelet, where the rope is stitched in and where the it slips into the aluminium bracket. 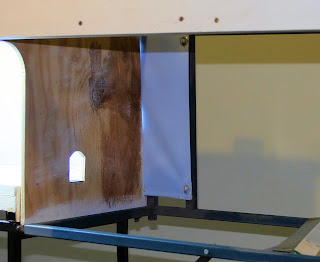 Here is where the canvas attaches to the layout, this keeps it nice and taught along the length of the scene. 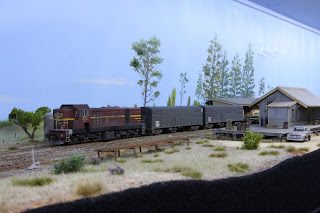 I am very pleased with the end result.
Cost wise it was a total cost of about $250, which I think is quite reasonable for a 6 meter long 500mm high piece. I think if we were to do it again I would look at having a scene printed on the canvas but I am still pleased with what we have.
Cheers
Posted by Andrew Campbell at 8:04 PM